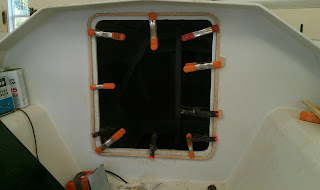 I figured that with an unproven, homemade boat design, it would be important to have a watertight hatch with some sort of positive locking mechanism.  The first thing I did was to bond a ringframe around the opening.  This would provide the hatch with a nice area to recess into. 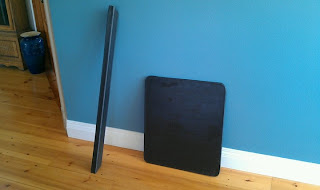 I built the hatch out of 3/8 plywood covered on both sides with a couple layers of carbon fiber.  This was to make it stiff and strong and to keep it from warping. (plus I just think CF looks cool!)  While I was at it, I also built the support beam for the traveller.  It is a ply U-beam which I also covered in layers of carbon. 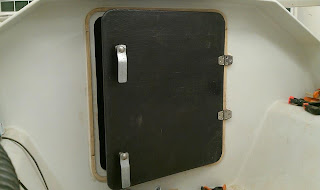 The hatch fit really nicely.  I then bonded an rubber seal around the inside perimeter of the hatch.  When the hatch is closed, the seal is compressed providing an excellent seal.  Later I changed out the hinges for ones that slip apart allowing for easy removal and stowage of the hatch 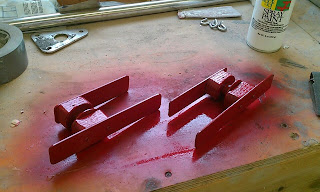 I also changed the hatch handles a bit.  The new ones seem to work really well.  I'm pretty sure that with this settup I should be able to lock things up pretty tightly if things start getting a bit sketchy out on the water!
Posted by Shannon Buys at 12:37 AM 2 comments: