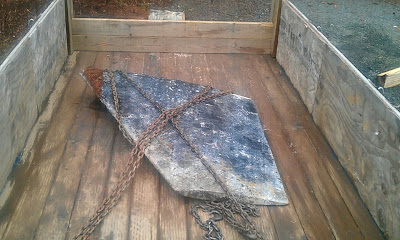 Earlier in the year I got a call from David asking about the progress on the boat...because of course I've been terrible about keeping my blog updated!  After receiving my usual scolding, he gave me great news that he had found a source of lead for my keel bulb.  Turns out he discovered an old keel from a scrapped boat at his local marina.  The marina guys told him $50 if we picked it up ourselves.  $50 for 1000 pounds of lead is an amazing deal!  So I borrowed a truck and my dads tilt bed trailer and headed to Poulsbo.  We dug a hole under it enough to get a car jack under it and jacked it high enough to slide a round wooden fencepost under it.  Then using a couple hand winches and some more fence posts, we rolled it right up  the tilted  trailer.  When I got it home and rolled off the trailer, I used a chainsaw to cut it up into managable chunks.  Lead cuts like butter with a chainsaw.  Just make sure to use a tarp to catch all the shavings so they can also be melted down later...and of course make sure to wear safety gear and use the right respirator to keep from breathing lead dust!
Posted by Shannon Buys at 2:06 AM No comments: