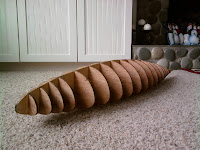 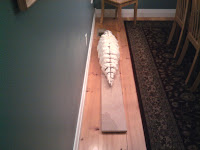 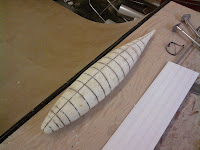 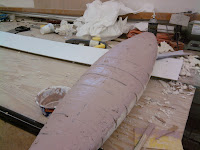 Continuing my work on the keel plug.  First I filled the skeleton frame with spray foam.  This was very cool as I ended up with something that looked like a giant grub larva..my boys were especially impressed.  Once the foam had cured, I used a hacksaw blade to  saw along the frames and bring the shape back to a bulb.  A little sanding, and now I'm filling it with bondo.
I'm heading off to work until Monday.  Hopefully I can make some more progress next week!

Posted by Shannon Buys at 11:05 PM No comments:

The Origins Of A Bulb 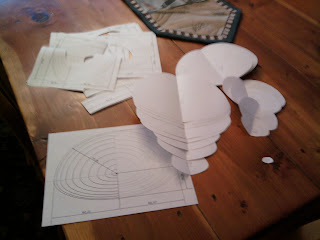 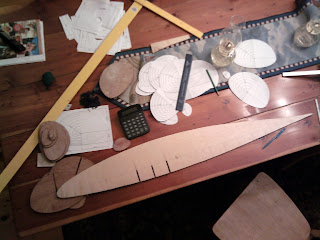 Things have been quite busy with the kids, the holidays, and work..but I've been able to find a bit of time to plug along on the boat project now and then.  I've continued fairing the keel fin and almost have it done.  I thought I was almost done last week, but with each layer of fairing compound, I'm excited to find I'm exceeding my expectations but that it's still not quite perfect..so I grab my template an add another layer of compound.  With the shop being kind of cold from the weather, it takes a while for each layer of fairing compound to cure.
So since I've been waiting between fairing layers, I've been taping seams on the inside of the boat and am almost caught up.  I have run out of 6" fiberglass tape so it looks like a field trip to Fiberglass Supply in the near future.
One cold night as the snow was falling and I didn't feel like heading out to the shop, I figured I should start thinking about the keel bulb.  So I poured myself some wine and I did. And what I thought was, there's no reason for me to re-invent the wheel and try come up with my own bulb shape.  Since this project is sort of similar to the i550, I've decided to use the bulb shape someone already designed for that boat..with only ever so slight modification. I found the bulb lines on the i550 forum and downloaded them.  The only problem is that the i550 bulb weighs 180lbs and I'm thinking I need this thing to weigh around 550 lbs  So I grabbed my calculator, scratch paper, another glass of wine and began measuring, calculating stuff, and running ratios.  By some method which my memory is not exactly clear on, I arrived at the conclusion that by enlarging the i550's bulb dimensions by 45% this new bulb would weigh precisely 550lbs.  I know when I did the calculations I was pretty confident that they were sound, however, I will consider any weight between 475 and 600 lbs a complete success.  And if it's way off, I melt it down, build a new mold, and re-cast!

The first step is to build a plug which I will use to cast a female mold in plaster or concrete.  I am building the plug out of plywood and foam which I will fair (arg!! there's that word again!) and cover in fiberglass.
Posted by Shannon Buys at 12:24 AM No comments: 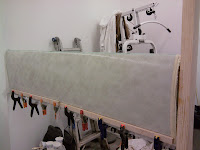 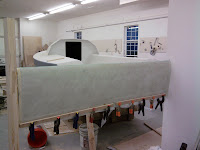 Finally finished laminating the keel.  Ended up using E glass alternating between 12 ounce biaxial and 10 ounce unidirectional fabrics. for a total of 11 layers.  Did a simple hand layup using a brush, squeeges, and a laminate roller.  It's a nice thick layer of fiberglass.  From what I can tell, it's just over an 1/8 inch thick.  Which should be just about right.  It also seems quite smooth and true to the foil shape.  I'm sure I'll still have to do some fairing, but hopefully not too much.
Posted by Shannon Buys at 10:57 PM No comments:

We Have a Keel Core! 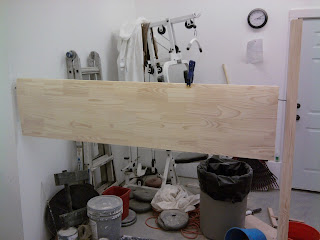 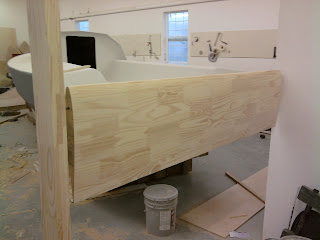 Got the keel core done today.  I'm happy with how it turned out.  I thought I would have to do some fairing but it's actually so close that I'm not going to risk messing it up!  I would of started laminating but I didn't have enough time to do all 12 layers so I didn't want to start.  I have a race ('Round The County) this weekend so maybe on Monday....
Posted by Shannon Buys at 11:36 PM No comments: 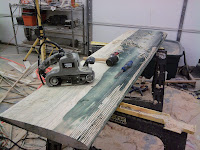 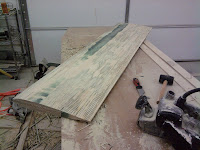 Got home from work today and had some time to work on the keel fin core.  After finishing making the cuts, I spray painted the whole thing dark green.  By doing this, it will be easy to see the depth I need to go to as I chisel and sand.    By using a chisel and mallet, I'm able to get rid of the wood and bring it down toward the right shape.  Then I use the sander to continue shaping the blank.  Once I get the foil shape roughed, I'll make a template and use filler to fine tune things.  It's fun and I'm feeling quite craftsman-like as I'm using the mallet and chisel to carve this foil shape.  Just hoping the finished core looks craftsman like!

On my way home, I stopped by Fiberglass Supply (that place is like a candy store..without the tooth decay!) and picked up the glass I'll need for the lamination.  I'm using 12 oz bi-axial e glass and 10.3 oz unidirectional e glass.  Probably around 6 layers of each will give me the strength I need and will give the foil a skin thickness of 1/8 inch which will give me the right shape.
Posted by Shannon Buys at 12:06 AM No comments: